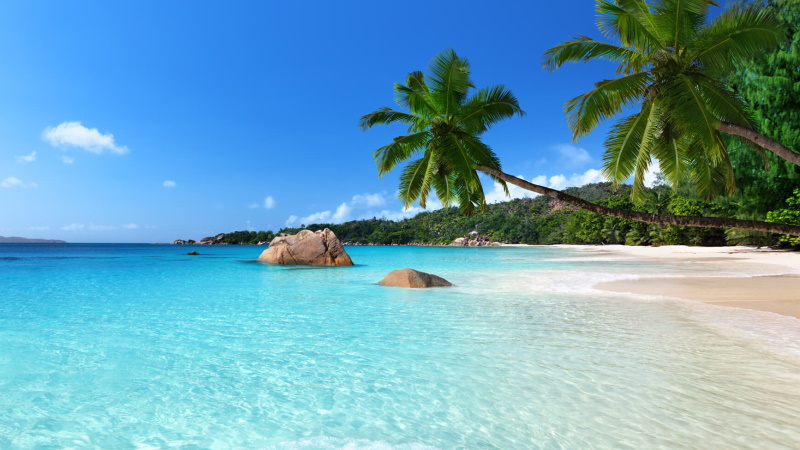 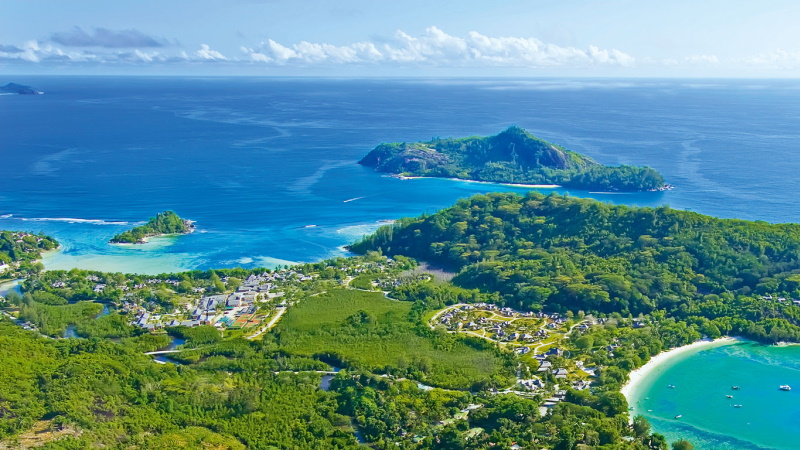 Praslin is the second largest island (38.5 km2) of the Inner Seychelles, lying 44 km (27 mi) northeast of Mahé. Praslin has a population of around 7,533 people and comprises two administrative districts: Baie Sainte Anne and Grand’ Anse. The main settlements are the Baie Ste Anne, Anse Volbert and Grand’ Anse.

It was named Isle de Palmes by explorer Lazare Picault in 1744. During that time it was used as a hideaway by pirates and Arab merchants. In 1768 it was renamed Praslin in honor of French diplomat César Gabriel de Choiseul, duc de Praslin.
Praslin is known as a tourist destination with several hotels and resorts, as well as a number of beaches such as Anse Lazio and Anse Georgette.

It has substantial tracts of tropical forests with birds such as the endemic Seychelles bulbul and the Seychelles black parrot. The Vallée de Mai Nature Preserve, established in 1979,[1] is known for the unique coco de mer and vanilla orchids. It has been reported that General Charles George Gordon of Khartoum (1833-1885) was convinced that Vallée de Mai was the Biblical “Garden of Eden”.

Praslin is home to Praslin Island Airport, while surrounding islands include Curieuse Island, La Digue, Cousin Island, Cousine Island and Aride Island. There are a few near offshore islets including Round Island (0.193 km2) and Chauve Souris (0.007 km2), both of which have hotel accommodations.

A large area in the south of the island has been designated as Praslin National Park and surrounding areas Important Bird Area.

Pick up from you accommodation. Visit of Vallée de Mai Nature Reserve, a nature park and UNESCO World Heritage Site.  It consists of a well-preserved palm forest, flagship species made up of the island endemic coco de mer, as well as five other endemic palms. End your short tour at Anse Lazio Beach, a beach situated in the northwest of Praslin Island, Seychelles, considered by Lonely Planet to be the “best beach on Praslin”, and one of the “best in the archipelago”.

Pick up from your accommodation. Visit the best beaches on Praslin Island.

Perfect choice to discover everything on Praslin in 8 hours.

Pick up from your accommodation. Visit of Vallée de Mai, a nature park and UNESCO World Heritage Site. Drive down to Grand Anse and Anse Kerlan. Visit the Pearl Farm, a black pearl factory. Meander to Baie Ste Anne. Stop at Cote D’or for some souvenirs or pictures. Finish off with the white sandy beach of Anse Lazio. Head back to your accommodation.

To save your wishlist please login.
login